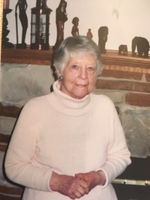 Doris G. Fano, age 92 passed away on Sunday, October 6, 2019at A.O Fox Nursing Home in Oneonta NY. Born in Fall River MA, Doris had resided in Metuchen NJ for 20 years and North Plainfield for almost 30 years before retiring to Morris NY in 2002. Doris had remained in Morris until recently moving to Oneonta NY in 2017.

Doris was incredibly hard working, she owned and operated Caronette Beauty Salon for most of her career. Doris began in Scotch Plains NJ and later moved the shop to North Plainfield until she retired in 2002.

She was an avid reader and later in her life enjoyed cooking, but most of all she loved spending time with her family especially during the holidays. As the oldest of nine children she hosted many of the holidays at her home.

She is predeceased by her first husband Francis Petercsak and her second husband Joseph Fano and her brother Bob Caron.

A visitation will be held on Friday October 11, 2019 from 6 to 8 pm at Higgins Home for Funerals 752 Mountain Blvd. Watchung NJ 07069. The funeral services will begin at 9 am on Saturday at the funeral home followed by a 10 am funeral mass at St. Luke’s RC Church in North Plainfield NJ. The internment will be held at Hillside Cemetery in Scotch Plains.