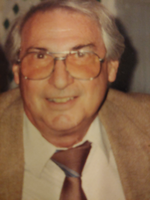 Joel B.Srager, age 90, of Durham, NC passed away on Tuesday, October 8, 2019 in Durham, NC. Born in 1929 in Plainfield, NJ, he was raised in Plainfield and then resided in South Plainfield, NJ and North Plainfield, NJ for many years before moving to Durham, NC in 2015. He graduated from Plainfield High School in 1947, served in the US Air Force and was a graduate of Rider College, Lawrence Township, NJ in 1952. He was a partner for many years at H.L Shrager & Co, a CPA firm which was located in Scotch Plains, NJ. He is survived by daughter Sara Senz and her husband Robert Senz from Naples, FL, daughter Sherri Srager Morris from Chapel Hill, NC, son Mark Srager from Bethlehem, PA and daughter- in-law Lori Srager from Easton, PA, eight grandchildren and eight great grandchildren. Pre- deceased was his wife Anna Baron Srager and son H. Scott Srager. Joel's hobbies were fishing, hiking and camping with family and friends. He was also an avid motorcyclist and made several cross country motorcycle rides with family and friends. His love of the outdoors and nature are a lasting legacy for his family and friends. Funeral services will be held on Thursday, October 10, 2019 at 12 noon at Higgins Home for Funerals, 752 Mountain Blvd., Watchung, NJ 07069. Interment will follow at Samptown Cemetery in South Plainfield, NJ. In lieu of flowers, memorial contributions may be made to Kehillah Synagogue, 1200 Mason Farm Rd, Chapel Hill, NC 27514.