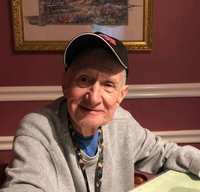 George Bilak, Jr., age 85, passed away on Tuesday, October 29, 2019, at Robert Wood Johnson University Hospital Somerset, in Somerville. Raised in Carteret and Port Reading, NJ, he resided in Warren from 1974-1989, before moving to Bedminster where he lived for thirty-one years.

George served his country with the United States Air Force, during the Korean War.

In his spare time George liked animals, fishing and spending time at the family summer home in upstate New York. He loved most of all the time he spent with his children and grandchildren and will be sorely missed.

Predeceased by his sister Elizabeth Sisko.

A visitation will be held on Sunday, November 3, 2019, from 2-6 p.m. at Higgins Home for Funerals, 752 Mountain Blvd. Watchung, NJ. A funeral service will be on Monday, November 4, 2019 at 10 a.m. at the funeral home followed by interment at Rosehill Cemetery, Linden.

In lieu of flowers donations in his name may be made to the Warren PBA or ASPCA.