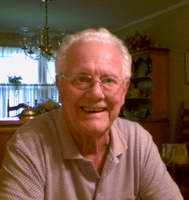 John E. DiLollo of Warren NJ died peacefully in his sleep on November 1, 2019 after a long illness. He was 94 years old.

A memorial service will be held on Sunday, November 10th at Higgins Home for Funerals, 752 Mountain Blvd,Watchung, NJ 07069 between the hours of 2PM and 4PM. A eulogy period will commence at 4PM.

He was born in Bristol Rhode Island on August 29, 1925, the son of Albert DiLollo and Anna (Chiaia) DiLollo. He was predeceased by seven siblings, Mary, Lucius, Guido, Emily, Frank, Rosette, Emma and William,

As a young child, John’s family relocated to Cranford NJ.  While attending a local dance, he met Josephine Spero of Roselle Park, NJ. Their courtship led to a marriage that endured for 76 years at the time of her passing.

He served in active duty during WWII fighting with the Army’s 75th Infantry and was awarded the bronze star for bravery. After the war, he returned and raised two sons and one daughter.  The family eventually settled in Warren NJ where he and his wife resided for 50 years.

In lieu of flowers, donations may be made in John’s name to St. Jude’s Children’s Hospital.