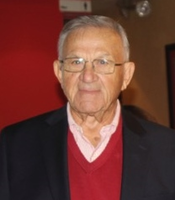 Gabriel DiDario, age 92, passed away on Tuesday, February 4, 2020, at RWJ University Hospital, New Brunswick. Gabriel was a lifelong resident of Plainfield, before moving to Bridgewater in his later years. Gabriel served with the Merchant Marines/Navy and Coast Guard. He was a self-employed real estate broker in Plainfield for many years and was a National Racquetball Champion. Gabriel was a member of St. Bernard's in Plainfield and Immaculate Conception Church, Somerville. In his spare time, he enjoyed playing golf, skiing, the racetrack and was a big football fan who enjoyed the giants and also, loved his NY Yankees. His greatest joy was spending time with his family and he will be missed by all. Predeceased by his first wife Megs DiDario; siblings Armond, Dino, Nicholas and Daisy. Survived by his wife Frauke DiDario; his children Sally Taglialatella and her husband Dom, Thomas DiDario and his wife Elaine and Anne DiDario; grandchildren Megs, Tommy, Dillon, Gabe, Michael, Mary, Joseph, Anthony, Shea and Elena; his sister Sally DiDario; stepchildren Elke Elliott and Lisa Borsewicz and her husband Ray; and several great-grandchildren. A visitation will be held on Wednesday, February 5, 2020, from 4-8 p.m. at Higgins Home for Funerals, 752 Mountain Blvd., Watchung, NJ. A gathering will be held on Thursday morning February 6, 2020 at 8:30 a.m. at the funeral home followed by a funeral mass at 9:30 a.m. at Immaculate Conception Church, Somerville. Interment will follow at Hillside Cemetery, Scotch Plains.