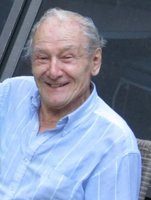 Peter Wittreich of North Plainfield passed away on Monday - March 16, 2020. Peter was born in Hinterberg, Gottschee - Yugoslavia (Slovenia) on February 2, 1922. He was the youngest of three children born to Joseph & Mary (Saumperer) along with sister Sophia & older brother Frank. The family worked in the lumber business prior to World War II. Due to the hostilities of the War in Europe the family was forced by the German Army to leave their home permanently and migrate to Austria where they thankfully found work on one of the local area farms in Styria (Untersteiermark). Also looking for work, Peter found a job as a driver for The British Occupational Command in Austria. After the War, he immigrated to America with the help of family members already living in the United States. They provided him with a job as a Knitter at their factory in Warren, New Jersey – Mt. Bethel Knitting Mills where he worked for close to 40 Years. Peter resided most of his life in North Plainfield, New Jersey with his wife of 64 years Gertraud (Schemitsch) who preceded him in death in 2016. He leaves behind two sister in-laws Hedi Agnello & Olga Wittreich, many nieces & nephews including nephew Walter Rom of Shaker Heights, Ohio.