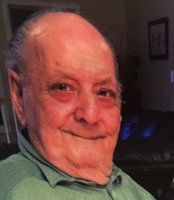 Anthony J. Coppola, Sr. age 90, passed away peacefully on Tuesday, March 17, 2020, in Martinsville at the home of his daughter surrounded by his loving family. Born and raised in Plainfield, he lived in North Plainfield for many years before moving to Martinsville a year ago. He was the owner/operator of Anthco Builders in North Plainfield for many years. Anthony retired from the Dunellen Board of Education having worked in maintenance. Anthony was a member of St. Joseph's Church in North Plainfield. In his spare time, he enjoyed golf, watching wrestling and Western's on TV. He loved the time spent with his children, especially the time he spent with his one and only "buddy", his grandson, Billy. He will be missed by all. Predeceased by his wife Barbara (Kaszas) Coppola in 1981 as well as his eight siblings. Survived by his children Anthony Coppola, Jr. and his wife Karen, Barbie Lare and her husband Bill and his grandson Billy. A visitation will be held on Sunday, March 22, 2020 from 2-6 p.m. at Higgins Home for Funerals, 752 Mountain Blvd., Watchung, NJ. A funeral gathering will be held on Monday, March 23, 2020 at 9:30 a.m. at the funeral home followed by a 10 a.m. service. Interment will follow at St. Mary's Cemetery, Plainfield.