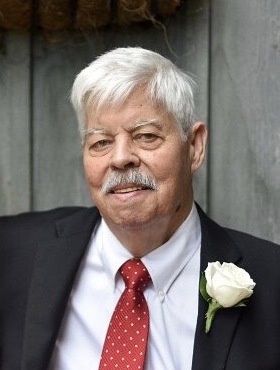 John James Lyons, Jr., age 76, passed away on Thursday, March 19, 2020 at the New Jersey Eastern Star Home in Bridgewater Township. He was born and raised in Plainfield, NJ, and spent many years in North Plainfield, NJ. He most recently resided in Lambertville, NJ to be close to his daughter’s family. John served in the United States Army for three years during the Vietnam war. John was a lifelong salesman, and most recently had worked for the Alpha Moving Company before retiring after 25 years of loyal service. He was a former member of St. Joseph’s Church and served as a reader for masses. John was a gifted storyteller who always enjoyed engaging in political debate. He loved his children and grandchildren and would frequently take trips to New Hampshire to visit his son and family. He is survived by his daughter Mary Lyons-Cane and her husband Chris, his son Michael Lyons and his wife Barbara, and his four grandchildren: Phoebe, Vanessa, Mikey, and John Henry. He is also survived by his sister Marilyn Loucks and her husband Doug, and his brother Ted Lyons and his partner Linda, as well as many nieces, nephews and friends. Funeral services are private.