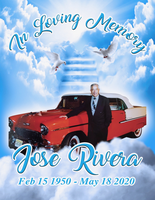 Today we come together, not to mourn, but to celebrate the life of one of the " GREAT ONES" Jose Sanabria Rivera Aka. Pop and to those who knew him well, "VIC". Jose was born on February 15, 1950 in Mayagüez Puerto Rico to Josefa Sanabria & Jose Rivera Sr., or as he always referred to himself, "A Valentines Day Baby". Although Jose’s father passed on while he was young, He was well looked after by his loving mother who raised Jose in New York City. When Jose decided to leave the nest, it was to serve his country proudly in the US Navy. Throughout the years, he would proudly regale us with his many infamous stories of serving our great nation on the USS Intrepid and the USS Yorktown aircraft carriers, from 1969 to 1971 as a boiler man/ fireman. Around that time, he met his first love, Karen aka Mom and helped raise Willam, his stepson. Although his stepson by way of marriage, he loved and cared for him as his own. And when the time came, he honorably and proudly and with much love and exemplary fortitude, raised his own three sons, Joseph, Torrell, and Brian. When Jose left the Navy, which he considered one of the highlights of his life, he tried his hand at professional truck driving . In order to get his first job, he actually lied to his then boss and told him he knew how to drive a stick shift, which we have come to learn over the years, he hadn't the slightest clue.“if you can’t find them, grind em". But being The quick study he was, and for the love and responsibility he felt to his family, he soon learned how to pick up the CB radio and drop the hammer down with the best of them . Jose came to be a very valuable employee, and loved by his piers and coworkers, which was no easy feat being a union trucker and shop steward for over 30 years. When Jose was not grinding gears, laying rubber down to the ground, and tearing up asphalt, he had a passion for fixing up and driving his vast collection of classic cars. One of which was his crown jewel, the 1955 Chevy Bel Air convertible with three on the tree. He proudly and Masterfully built this car from the ground up and had the pictures to prove it. The infamous family album of his pride and joy along with a sprinkling of pictures of all his children, grandchildren, family and friends. And then there's his huge collection of Schwinn bicycles in which he also took great pride in. When he wasn’t making rounds and shaking hands, wheeling and dealing at swap meets and flea markets, where he made some of his best deals and best friends by taking the art of the deal to the next level, He was also a member in various groups and organizations such as: -USS Intrepid Assoc. -USS Yorktown Assoc. CV10 -American Tri 5 Assoc. -Garden State Gear shifters and -Raritan Bay Cruisers Never walking away from a bargain or a sale all while being with his partner of 25 years Cheryl and her children Dawn And Sean in which, they have also made many fond memories together throughout the years. Jose was an active 70-year-old and enjoyed his time with his kids, grandchildren and Cheryl while spending time together at all the family gatherings, car club meetings, swap meets, and many other events which they attended. He touched the lives of so many along the way and it is easy to see why Jose, a.k.a. pop, was loved and respected by so many. To his family, he is a beloved father, husband, grandfather, and partner. To all he was great friend, a mentor, and beautiful soul. He always had a sage word of advice and wealth of knowledge on many things that take a lifetime to acquire . Jose will always be a kindred spirit who was always able to relate to so many . The many events, swap meets, and car shows where he was greeted like a mayor. With all the pomp and circumstance in his classic style of overalls or mechanics shirts where he strolled around as gracefully as and as happy as a man could be, all the while greeting his many friends from over the years. He will be sorely missed . To everyone who had the pleasure and honor of knowing Jose, we will carry your memory in our hearts and minds . The old sailor adage goes “ Fairwinds and following seas “. Rest easy pop, knowing you left behind a legacy that will never be forgotten. From the bottom of all our hearts, we miss and love you, and we will one day meet again at a heavenly Car Hop. We are asking that in lieu of flowers, that you either donate to a charity or perform a random act of kindness in Jose‘s name. He would have wanted it that way Thank you