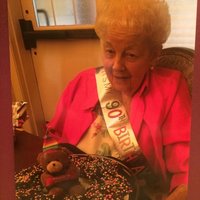 Audrey Sara, 92, of Basking Ridge NJ, passed away peacefully on Wednesday, July 29, 2020 at Fellowship Village. Born on July 27, 1928 in Akron, NY, she was the daughter of Lyle and Violet Mayne. She grew up in Elizabeth, NJ and the family later moved to Lockport, Illinois, where she graduated from high school and Lockport Junior College. Upon the family’s relocation back to NJ, she graduated from Berkeley Secretarial School and began working as an executive secretary for Merck. On June 18, 1955, she married Thomas H. Sara, and initially lived in Linden before settling in Clark for over 50 years. In 2008, they moved into Fellowship Village. During her years in Clark, she enjoyed being a stay-at-home mom, but later returned to work as a receptionist for both Polychrome, and later an ophthalmologist. She enjoyed her many friendships that she made over the years through the churches she attended and her many social circles. She was known for her kind heart, beautiful smile, perfectly done hair (every Friday), love for family, enjoyment of music, love of desserts and (especially) dogs. She will always be remembered for her endearing phrase, “God loves you and so do I.” Audrey was predeceased by her beloved husband, Thomas on August 20, 2008 and her parents. She is survived by her sister, Shirley Sloane in Texas, her son Lyle of Wayside, NJ, her daughter Susan Andersen of Warren, her three grandchildren Kelsey, Kaitlyn, and Kyle, her grand-dogger, Brownie, and several nieces and nephews. Cremation is private. A memorial celebration of Audrey’s life will be held at a later date. In lieu of flowers, donations can be made in her memory to St. Jude’s Children’s Research Hospital or The Seeing Eye, Inc.