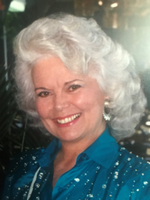 With profound sadness we announce the passing of Virginia M. Cooper, our loving and devoted mother and friend to all whose lives she touched. Virginia Marron Cooper, age 94, passed away peacefully on Friday October 9, 2020. She was born April 11, 1926, in Paterson, NJ. to Joseph and Caroline Marron, Jr.. She met her long time love, Leslie V.W. Cooper, during WW2, after his commissioning in the U.S. Army, at a New Year's Eve party and married him on November 5, 1947. She was educated at Our Lady of Mt. Carmel grammar school, Benedictine Academy, Marymount College and Columbia University. Her love of God, country and family was evident in her volunteer work. She served as a Red Cross Gray Lady at Valley Hospital in Ridgewood before moving to Mountainside, NJ in 1965 where she became a member of the Mountainside Rescue Squad. With over 50 years of volunteer work in the healthcare field, she was a member of the Summit Women's Auxiliary of Overlook Hospital and served as TWIG 31 Chairwoman. She worked for Hillhouse in Summit for Drug and Alcohol Rehabilitation, and as an Occupational Therapist Volunteer in the Psychiatric and Physical Therapy departments. She was the Health Career Chairwoman at Overlook Hospital and was on the Steering Committee for the Center for Community Health. She served on the Mount Carmel Guild Executive Advisory Board in Cranford where she was awarded the Tri-Hospital Health Fair Educational Award. She was also one of the first trained volunteers for Overlook Hospital's Hospice program. Within her faith community, while in Mountainside, she was a member of Our Lady of Lourdes parish where she served on their first Parish Council, becoming a CCD teacher and CYO social and religious moderator when she was awarded the Archdiocese of Newark's Outstanding CYO Laymen Award. She was one of the first Eucharistic Ministers at Our Lady of Lourdes and ministered at the Children's Specialized Hospital, Overlook Hospital and Manor Care. She was a member of the Rosary Altar Society, in many leadership roles, charter member of Eucharistic Chapel, the Church Committee for Renovations, a Cursillo member and was the first woman appointed to the Archdiocese's of Newark Deacon Support Committee helping to mentor deacons as they transitioned to the priesthood. Within her civic community, she was a Certified Red Course Instructor, a member and later president and manager, of the Women's Softball League and a member of the Mixed Bowling League, Westfield Tennis Club, Watchung Riding Club and Echo Lake Country Club. Her love of natural beauty and history drew her to become both a member (30 years) and former President of the Garden Club of Watchung and Watchung Lake Renovation Council, member of the Village Center Preservation Commission, the Traffic and Beautification Commission, Open Spaces Committee and the Historical Committee where she co-chaired the building of the Veteran Memorial Monument in Watchung. Among her many talents, at an early age, she was a nationally awarded artist. She was a member of the Ridgewood Art Association, the Summit Art Ass. and the Westfield Art Ass. She taught Art and Interior Design while her children were students at Oak Knoll School of the Holy Child. During her youth she would model for her aunt, Eugenie Marron, the noted artist, sculptor, sportswoman and author, whose works have been exhibited at the Carnegie Institute and Smithsonian Institute. Her family were leaders in the petroleum industry where her grandfather, Joseph Marron, Sr., pioneered the distribution of heating oil in New Jersey by way of the Home Fuel Oil Company (retail) and Coastal Oil Company (wholesale) and was considered one of the primary suppliers of petroleum on the eastern seaboard. She was the loving & devoted mother of Leslie F. Cooper of Waretown, NJ., Sally A. Chardos of Indian Land, SC, Karen McAuley of Rock Hill, SC and Diane Kindall of Center Valley, PA., and was predeceased in death by her devoted husband Leslie, and son, Michael J. Cooper. She had 12 grandchildren and 22 great-grandchildren. In the end, most of all, she loved her family and instilled in her children, grandchildren and great-grandchildren the values of compassion and love for all sentient creatures and the sharing of all their talents with their community and friends; these values have served them well. She will be dearly missed and forever in our hearts.