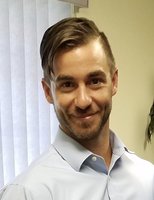 Jason John Mancinelli, 37, passed away on October 11, 2020 in Los Angeles, California. Jason was born on October 5, 1983 in Summit, New Jersey and grew up in Green Brook, NJ. Affectionately nicknamed, “Jase”, “Jasoni”, and “Fooster” growing up, he loved to play soccer and baseball. As the classic middle child, bookended between a younger sister and older brother, his childhood was spent giving into “Pretty Pretty Princess” games with his younger “sis” and intense “boom ball” games with his older “bro.” Jason graduated from Watchung Hills High School in 2002 and earned his Associate’s Degree from Raritan Valley Community College. Throughout his life, hard work and determination to better himself remained a constant driving force. His quick wit and endearing smile (combined with his infamous mischievous laugh) drew people to his fun-loving personality. Running after his nieces, scooping them up and chanting “sack of potatoes” and lovingly calling them both “munchkins” will forever be remembered. Jason was an avid fan of the Yankees and New York Giants. He loved movies, always watching everything and anything, then coming up with a quote to be used later. In February 2017, Jason moved to Los Angeles, California. During his time in CA, he became the operations manager at Valley Detox, mentoring many people. He helped others reflect on their own lives while guiding them to success. Because of this passion, he started classes at Loyola Marymount University, working to get his drug and alcohol counseling certificate. Jason was hardworking, loyal, and a good friend to many. His compassion and listening ear had a positive effect on everyone he met. “Live for something or Die for nothing” was the motto of his home in California. This saying added meaning to his own life and stayed with him as he sought to motivate others. He used his life to have a positive influence on so many people who needed the support. Jason never gave up, even stating recently, “I’m going to dig deep and fight like Rocky.” A memorial for Jason’s life was held in California on October 15th. Many people attended, sharing stories and tears which was a true tribute to the lasting influence he had on dozens. Jason Mancinelli is survived by his loving parents Louis N. Sr. & Barbara Mancinelli of Green Brook, NJ, his older brother Louis N. Jr. and sister-in-law Nina Mancinelli and their two daughters (his beloved nieces) Sofia and Lydia of Dedham, MA, and his younger sister Allison and brother-in-law Evan Kolanko of Phoenix, AZ. He also leaves behind his grandparents Louis F. Mancinelli of Mountainside, NJ and Lee Turner of Marco Island, FL. Jason will forever be remembered by numerous aunts, uncles and friends. A visitation will be held on Wednesday, October 21, 2020, from 5:00 pm to 9:00 pm at Higgins Home For Funerals, 752 Mountain Blvd., Watchung, NJ 07069. A funeral service will be held on Thursday, October 22, 2020 at 11:00 am at the funeral home followed by interment at Hollywood Memorial Park in Union, NJ. In lieu of flowers, donations may be made in Jason’s name to Design Recovery LLC, Attn: Derek Eckley, 11960 Modjeska Pl, Los Angeles, CA 90066.