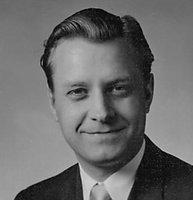 Flemming Gillesberg died peacefully in his sleep at BrightView Senior Living in Warren, NJ on November 14th, just two weeks shy of his 92nd birthday. He was a native of Hellerup, Denmark and, as a young man, lived for five years under German occupation during World War II. After the war, he fulfilled his compulsory military service in the Royal Danish Navy, and then pursued a career in business. He came to the United States on an exchange visa in 1953, and worked at the G. Fox & Co. department store in Hartford, CT. Before returning home to Denmark, he embarked on a cross-country road trip to see for himself the vast beauty of America. The memories of that journey stayed with him for the rest of his life, and inspired his deep love of nature and commitment to conservation. His trip concluded in San Francisco, where he met Katherine Swanson and the trajectory of his life changed. They married in her hometown of Montclair, NJ in 1957, and ultimately settled in Westfield, where they raised their three daughters. Flemming became a naturalized citizen in 1962, and worked for nearly three decades in international sales for Tenney Engineering in Springfield. He enjoyed tennis, opera, salty licorice, and vigorous philosophical debate. He is survived by his daughters Carol Gillesberg of Warren, Anne-Marie Gillesberg of Cape May, and Linda Lawrence, son-in-law Len Lawrence, and granddaughter Katherine Mae Westmoreland of Yelm, WA. Survivors also include his sister Aase Marthinussen of Dyssegaard, Denmark, his extended Danish family of nieces and nephews, and his former wife Katherine Fletcher of Lacey, WA. At the end of his life Flemming struggled with dementia, but never lost his courtly European charm nor his kind and gracious spirit. Cremation was private. Donations in Flemming’s memory can be made to Compassion & Choices at www.compassionandchoices.org