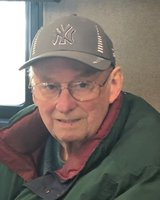 U.S. Army Veteran, Loving Husband, Father, Grandfather, and Great Grandfather Ronald Kilgore passed away peacefully on Saturday, November 14, 2020, after a short illness. He was born on October 4, 1934, in Easton, PA. In 1947 Mr. Kilgore’s family moved to Summit, NJ, where he attended and graduated from Summit High School. After high school, he enlisted in the U.S. Army, where he served for two years in Worms, Germany. After his honorable discharge from the Army, Mr. Kilgore began a 38-year career in the Research and Development department at Ciba-Geigy Pharmaceuticals (Novartis) in Summit, NJ. Mr. Kilgore was an avid NY Yankees and NY Giants Fan. He was also an active member of the Jaycees organization and served as Internal Vice President at one time. He enjoyed fishing off his boat in Barnegat Bay and was a rock and coin collector. More than anything he enjoyed spending time with his family. He is predeceased by his parents, George and Evelyn Kilgore; and his sister Shirley Phillippi. Mr. Kilgore is survived by his beloved wife Inge Kilgore of 61 years; his three children, Nancy Schmidt and her husband Richard of Lebanon, NJ, Kevin Kilgore and his wife Jayme of Furlong, PA, and Alison Mackessy and her husband Thomas of Chatham, NJ. He was blessed with seven grandchildren, Jeffrey Schmidt and his wife Liza, Julie Schmidt, Stephanie Hess and her husband Brandon, Amanda Kilgore, Abby Mackessy, Meghan Mackessy, and Thomas Mackessy; and two great-grandchildren, Peyton and Kylie Hess. Due to Covid, a private family service will be held on Friday, November 20, 2020, at Higgins Home for Funerals, followed by a private cremation. In lieu of flowers, donations may be made in memory of Ronald Kilgore to Arc of Hunterdon County, Shelbourne at Hunterdon, 53 Frontage Road, Suite 150, Hampton, NJ 08827.