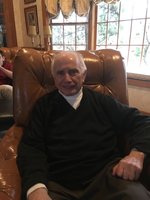 Frank Losavio, 93 of Warren, NJ passed away on November 17, 2020. Born to Vincent and Marietta of Plainfield, he graduated from Plainfield High and enlisted in the US Coast Guard. Serving two years, he returned to work in his father's Barber Shop. Recalled to the Navy, he served another two years during the Korean War. Upon his discharge, he took over the Barber Shop where he worked in Plainfield until 1985, moving then to Watchung. Loving his work, he was renowned by generations for his unfailing good will, generosity of spirit and unlimited jokes and stories. Retiring in 2001, he devoted his life to his family and his hobby of building rock walls, some of which were subjects of newspaper articles. He is survived by his wife, Norma; his children, Vincent, Joseph, Maria, and Frank Jr. He also has five grandchildren, Jenna, Regan, Ryan, Hannah, and Spencer. In lieu of flowers, please donate to Wounded Warriors or Hospice in his memory. There will be a visitation at Our Lady of the Mount in Warren, NJ on Saturday, November 21, 2020, from 10:00 a.m. to 10:30 a.m. A Funeral Mass will follow starting at 10:30 a.m. at the church. Funeral arrangements are under the direction of Higgins Home for Funerals in Watchung, NJ.