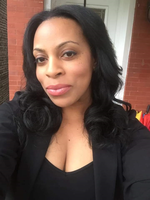 Jennie Rebecca DuBose-Eure, age 42, passed away peacefully surrounded by her loving family on Sunday January 3, 2021 at her home in Piscataway, New Jersey. Born in Brooklyn NY to Clarence Robert DuBose and the late Charlotte Miller Sherman DuBose, Jennie had resided in North Plainfield, Birmingham AL, Atlanta GA, Selma AL, and Plainfield NJ before recently moving to Piscataway several months ago. Jennie began her education at St. Charles Borromeo School in Brooklyn NY, she then attended the Westside Middle School in Selma AL where she was to meet her future fiancée Ed Philon. Jennie graduated from North Plainfield High School in 1996. She received her bachelor’s degree from the Alabama State University with a major in sociology and a minor in public speaking. While at Alabama State, Jennie became a member of the Alpha Kappa Alpha sorority where she developed lifelong friendships. Jennie earned her MBA from Strayer University 2016, in Washington D.C. Jennie was an operations manager for the Bank of America Corporation for three years. She worked at the east coast operations headquarters in Newark in the mortgage department. She was a current and active member of the Bible Missionary Baptist church. Jennie enjoyed reading and going to the gym to stay fit. In college she discovered her lifelong love of public speaking by working at a college radio station at Alabama State University. She also followed politics and current events. Her greatest passion was helping people, mostly through her advice. Jennie loved being a mentor to magnet high school students at Union County Vocational School. She will be missed by all. Jennie is predeceased by her mother Dr. Charlotte Miller Sherman DuBose, ESQ. in 1986 and her brother Bruce DuBose in 2003. She is survived by her father Clarence Robert DuBose, her fiancée Ed Philon, her son Isaac Eure Jr and his father Isaac Sr. her brother Byron DuBose, Uncle Charles Dubose, Aunt Patricia Dubose, Cousin Corrine DuBose, Cousin Hasan Dubose and Cousin Robbie Sherman Jones. She is also survived by a host of extended family and loving friends. Memorial donations may be made in her loving memory to the American Cancer Society or the Metastatic Breast Cancer Alliance. A visitation will be held on Saturday January 9th 2021 at Higgins Home for Funerals 752 Mountain Blvd. Watchung NJ from 4 to 7 pm. A private service can be viewed at 2:30 pm at https://www.hdezwebcast.com/show/jennie-rebecca-dubose-eure. The cremation will be private.