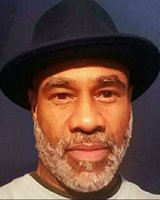 Rommel grew up in Plainfield, New Jersey, where he attended Plainfield High school and graduated in 1982. As a young man he moved to the greater Atlanta, Georgia area in the late 80’s; however, he considered himself a life-long New Yorker at heart.

He was passionate about sports, loyal to his New York teams and he did not hide his dislike for Atlanta sports teams! He was very athletic, and he played handball, racquetball, basketball, and softball. He also studied Martial Arts - Bruce Lee’s Jeet Kune Do style and achieved the rank of Blue Belt. He enjoyed a wide range of music and played the saxophone.

He was a loving father to his two beautiful daughters, Dasia and Jade, with his former wife, Stephanie Evertsz. His daughters were his pride and joy.

Rommel had an entrepreneurial spirit; he was a Master Barber and owned a barbershop in Decatur, Georgia. He also worked as a telecommunications technician, dialysis machine technician, and truck driver.

Rommel was proud of his Puerto Rican heritage; he enjoyed cooking and eating traditional Puerto Rican dishes. He served many faithful years as a Prince Hall Mason and Shriner.