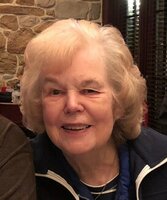 Born October 22, 1933, in Cornwall, New York, she was the daughter of the late George Stanley and Edna Meyer Nichols.  On June 26, 1955, she married John S. Leister, who preceded her in death on February 25, 2009.  Her sisters, Penny St. Clair, and Patricia Curcuru, preceded her in death as well.  Her younger sister, Georgia Wheeler, is a resident of Maryland and married to Col. JB Wheeler, who retired.

Nancy grew up outside West Point in Highland Falls, New York.  She was a member of the Presbyterian Church and served as the church organist for a short time.  She graduated from Highland Falls High School in 1951 and from Bucknell University in 1955.  Nancy earned a Bachelor’s Degree in Music Education with a minor in English.  As a senior at Bucknell, Nancy met John Leister, the young Band Director at Lewisburg High School.  They married that June.  After raising her three children, Nancy taught music in the public schools of Chatham and Readington Township, New Jersey.  She led school choirs and was a teacher for K-6 general music classes.  Nancy did further graduate work at Westminster Choir College.  Nancy was a member of the Kappa Delta sorority and stayed active in their local chapter into her adult years.  Nancy’s true passion was her family.  She was a loving mother, grandmother, and great-grandmother and looked forward to visits, phone calls, and daily stories about members of the family.

Nancy was a member of the Chatham United Methodist Church, and her ashes will be interred in the Memorial Garden there next to those of her husband.  There will be a Memorial Service on Saturday, January 28, 2023, at 12 p.m. at the Gloria Dei Lutheran Church, 300 Shunpike Road, Chatham, NJ 07928.

Memorial contributions may be made to the New Providence EMS, 7 Academy Street, New Providence, NJ 07974, https://newprovidenceems.org/donate/ or to the Foundation Fighting Blindness, www.blindness.org, or to the charity of your choice.