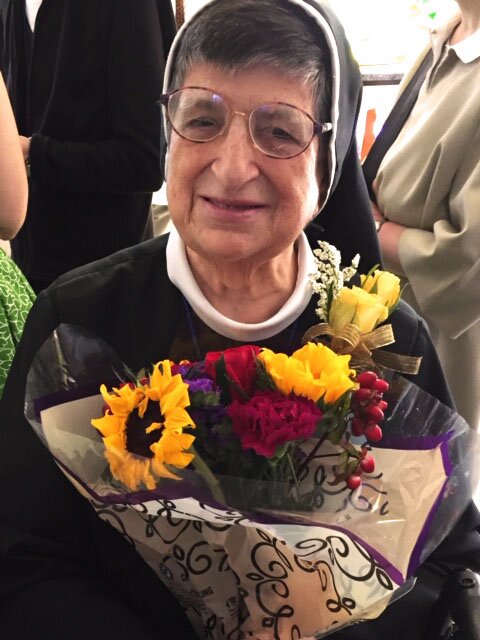 Barbara Ann Simpson was born at St. Michael’s Hospital, Newark, NJ, the third child of Thelma and Fredrick Simpson on September 23, 1940.  She attended St. Agnes Grade School, Atlantic Highlands, grades 1 through 5, then completed her primary education at St. Mary’s School, New Monmouth.  After graduating from Middletown H.S., she held various jobs, including a short-order cook at a Rest Stop on the Garden State Parkway.

During those early years of her training, she worked in various areas within the Nursing Home Facility, and in 1987, she successfully completed her training and was certified as a Nurses Aide, where she lovingly cared for the women in the Residents area as well as those in the Nursing Unit. She also worked for several years on Night Duty. Sr. Veronica was known for her kindness and compassion in her ministries, especially during the dying process.  She was loved by family members of the residents.

Sr. Veronica is survived by her sister, Cecilia Ladd, her brother, Paul, and niece Valerie Strehl, and her husband Bill. She is preceded in death by her parents, Thelma and Fredrick Simpson, sisters: Gertrud Manning, Patricia Cunningham, and her brother, Fredrick. She is also survived by many nieces and nephews.

Share Your Memory of
Sr. M. Veronica
Upload Your Memory View All Memories
Be the first to upload a memory!
Share A Memory