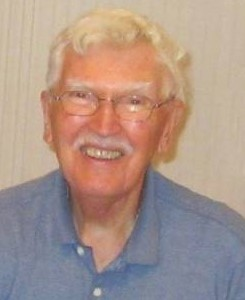 James (Jim) Edwards, 85, passed away peacefully on July 8 with his family by his side. He was born on October 22, 1933 in Conshohocken, Pennsylvania, served in the U.S. Army from 1953 to 1955. Jim lived for 55 years in Bridgewater, NJ where he was an active member of the Church of the Blessed Sacrament, serving as a lector, eucharistic minister, RCIA instructor and Parish Trustee.

Jim worked for Merck Sharpe & Dohme for 40 years, retiring in 1991. He began his career at the company in the mailroom, and completed his undergraduate degree at LaSalle University while working full time. At his retirement, Jim had advanced to the position of Executive Director, Global Compensation and Benefits.

Jim’s passion was historical restoration. He was a member of the New Jersey Region of the Antique Automobile Club of America, where he served as president in 1989. He meticulously restored a 1921 Model T Ford Huckster Wagon, a 1926 Model T Ford Speedster, a 1927 Model T Ford Touring Car, and a 1948 Willys Overland Jeepster, all of which have won numerous regional and national awards. Jim recently donated the Huckster Wagon to the Model T Ford Museum in Richmond, Indiana. Testament to his dedication to antique car restoration, he moved his family to Kansas following his retirement to attend McPherson College where he graduated magna cum laude with a degree in Auto Restoration Technology. In addition to antique automobiles, Jim and his wife Gloria restored a Victorian house in Cape May, NJ, where they spent many happy days with their children, grandchildren, family and friends. In recent years, Jim spent hours researching the genealogy of his mother and father’s Irish ancestors.

An avid fan of UConn women’s basketball and the Philadelphia Phillies, Jim attended every Phillies opening game, rain or shine, with his sons Jamie and Dan and rarely missed a night watching the Lady Huskies. He valued his family above all and treasured his grandchildren, frequently visiting their sporting and school events to cheer them on and show his support.

Visitation will be held on Sunday, July 14, 2019 at Higgins Home for Funerals in Watchung, NJ from 2-4 PM and 7-9 PM. A Mass of Christian Burial will be held at 10:00 AM on Monday, July 15, 2019 at Blessed Sacrament Church in Martinsville, NJ. Interment will be at Holy Cross Cemetery in Basking Ridge, NJ immediately following Mass.

In lieu of flowers, donations may be made to the McPherson College Automobile Restoration Program in his name. Donations may be sent to Amelia Lutz at McPherson College, James P. Edwards Memorial Scholarship, 1600 East Euclid Street, McPherson KS 67460 or made online at https://www.mcpherson.edu/giving/make-a-gift/ with his name specified in the comments.

Share Your Memory of
James
Upload Your Memory View All Memories
Be the first to upload a memory!