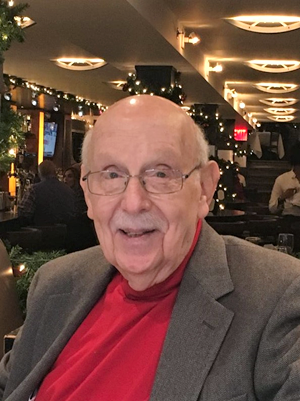 Murray Lawrence Howard entered eternal rest on February 15, 2021 (4th of Adar, 5781) at home with his loving wife Barbara and family members at his side. He was born on May 16th, 1928 in Providence, Rhode Island to Sigmund and Dora Seidel Horovitz. Active in the Boy Scouts, he earned the rank of Eagle Scout with honors in 1944. Murray became Troop Leader/Scout Master in Providence and at the Yawgoog Scout Reservation in Rockville, RI.  During WWII he was selected to represent US Scouting on an exchange program with Canada. Following graduation from Providence’s Hope High School, he enlisted in the US Army, and was honorably discharged in 1947 having achieved the rank of Corporal.

In 1954, Murray and Barbara relocated to Plainfield, NJ where he began a career in the photography business with Augusta Berns Studios. He rose to manage several studios located in Bamberger’s Department Stores.  He was a highly acclaimed photographer, capturing portraits of famous entertainers, NJ public officials and statesmen for a program called “Names in the News”. He received an Allen Funt Candid Camera award for getting passersby to coach babies to smile. Murray later used his photographic expertise, management acumen, and unmatched people skills to launch successful careers with Chromalloy American, Lorstan Studios, and the leading yearbook firm Taylor Publishing/Balfour. Just prior to his retirement, Murray was honored with the firm’s most prestigious award, the Bill Taylor Award, recognizing his sales leadership and dozens of mentee relationships.

Murray was devoted to his family and his community.  He took great pride in the Warren Township home which he and his wife planned and built in 1969. He delighted in his yard and landscaping and enjoyed contributing to and observing the growth of the thriving town Warren has become today.  Murray and his family and their friends enjoyed summers at Warren’s Deerwood Swim Club. In 1970 when he and Barbara saw the need for Jewish Education and social connections, they together with four other local families founded the Mountain Jewish Community Center, which became Temple Har Shalom. He served as the Center’s Founding President.  Murray and Barbara remained active members of the congregation. Murray was a Rotarian in Newark, NJ. During the Vietnam war he was an active member of the Navy League helping veterans find employment following their service.

Murray was a fan of WWII fighter planes and was a Founding Member of the American Air Museum in Britain. He was very proud when finding his name honoring his support during his and Barbara’s visit to the museum in Duxford. He enjoyed WWII movies, particularly “Twelve O’clock High” (he knew its script word for word). If the British screen actor Harry Andrews appeared in a film, Murray and his family had seen it many times over. On a trip to London, Murray happened to meet Harry Andrews; the actor met his greatest fan and the fan introduced Mr. Andrews’ dinner guest (his nephew) to his body of work!

Murray and Barbara loved to travel, evidenced by dozens of photo albums and journals documenting their trips and cruises to the Bahamas, Bermuda, England, France and Normandy, Spain, Greece, Croatia, Italy, Scandinavia, The Baltics, Russia, and Israel. Together they enjoyed Broadway Theatre, dining out, and entertaining family and friends at home. Later in life, they could be found snuggling together on their den sofa, holding hands and “resting their eyes”.

Murray was always ready to give a toast, provide words of encouragement, and discretely provide assistance to those in need. Murray brought more light, positivity, joy, and laughter to the world.

Shiva will be conducted by Zoom (details to follow).

To honor Murray’s memory, donations may be made to Atlantic Health Hospice and Temple Har Shalom.

Share Your Memory of
Murray
Upload Your Memory View All Memories
Be the first to upload a memory!