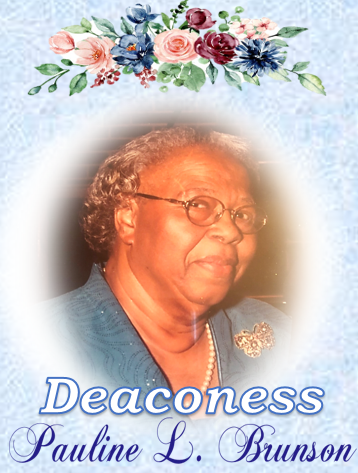 The Digital Invitation Download is a list of all Virtual Services to be held for the funeral of Pauline Lucille Brunson.
Pauline Brunson Invitation.pdf

Deaconess Pauline Lucille Brunson, “Polly” to her family, was peacefully called home to be with the Lord just after her husband spoke his last words to her “…hurry home. I love you.” at JFK Hospital, Edison, NJ on April 5, 2021.

Pauline was born the baby girl of Walter and Lucille Gordon on October 31, 1941 in Nixville, SC. Her mother passed shortly after childbirth, and she was raised by her paternal grandmother, Jane Gordon, in the home of her grandmother’s daughter, Alease and her husband Cee Dee Singleton in Newtown, SC, along with her cousin Bob Bing.  Her Aunt Alease and Uncle Cee Dee continued to raise Pauline as they began their family. Her siblings, Nathaniel, Herbert, Albert, Lueneter, Annie Jane, Roosevelt and Alice, were raised by her father and stepmother.

Pauline was gifted with love from two homes. Although she may have been momma’s baby of the Gordon nine: she became big sister to Annie Mae, James “Bubba”, and Laura Jane, and welcomed in their home twin babies, Johnnie and William “Shorty”, making the Singleton household complete with 6 children. They recall life being perfect, just love, and good times.

After graduating Estill High School in 1960, Pauline, like her birth sisters before her, wanted to relocate north. So she moved with her sister Alice and her husband Joe to Plainfield, NJ in 1961. Having accepted the Lord as a teenager back home at Pentecostal Holiness Church under the leadership of Bishop Frazier, she continued serving the Lord in New Jersey. She joined the Church of the Living God in Fanwood, where the pastor was Rev. Arthur Warren. She ushered, was devotional leader, and often talked about playing the big drum; and it is where she met the love of her life, her husband, Lacy Brunson.

Attracted to her smile and kind nature, Lacy approached her to offer her a ride home; she turned him down and prompted him to pray on it. Lacy reports that he “never did pray, but after while she came around”. They were married on March 7, 1964 and began their 57 years of wedded bliss. To this union, three sons were born, Lacy Ronald, Sr., Dwight, and Brock. It was a peaceful home full of love. Pauline’s husband worked nights from the beginning of their marriage until he retired, so she maintained the home. With her husband’s support, the boys knew they were a united front. They modeled a good marriage and family rearing for their sons. While maintaining the home, Pauline also worked. Her employers included MarKay Bags, Singers, Unisys, and she retired from Precision Graphics. The Brunson lives included family, church, football, and good eating. Pauline’s NJ sisters, ‘Sue’ and Alice, along with their cousin Lou, were always together. They shared information, swapped recipes, and enjoyed Christian life together. They had holidays, Sunday dinners, backyard barbeques. Her special occasion dish was baked macaroni and cheese and any baked good from pistachio cake to 7 –up cake.

From Fanwood, they moved their church membership to Zion Holy Church, Newark, NJ in 1975. They loved the excitement and the families of the church. Pauline continued singing as a devotional leader, joined the usher board, and later became a deaconess. She served faithfully in her church through the pastorate of Bishop Leonard R. Williams, Bishop Evelyn Williams-Gordon, and current pastor, Elder Clarence Wright. She supported financially, spiritually, and in-person. At her transition, she was president of the usher board. Even as her legs would not allow her to march the aisles, she sat by the door signaling, training and directing the other ushers.  Her spot when not ushering was on the right hand side of the church window aisle, a few rows back, where you could find her praising the Lord.

Pauline never forgot about down home. Her Newtown family often visited and she visited them. She always stayed connected. Uncle Cee Dee and Aunt Alease would come, Laura Jane would stay sometime in the summers before heading to school, and Annie Mae came and stayed with her and Lacy in their home for a while. Pauline couldn’t wait for family reunions. As soon as she received her information, she was on the phone encouraging her siblings to make their reservations early so they could have their rooms by each other. Her sons recall feeling like celebrities at the reunions because everywhere they went somebody would say, “those Polly’s boys”.

Pauline was personable with a smile you couldn’t forget and it didn’t take much to bring her smile. She enjoyed reading, and ordering from the catalogs, baking, doing crossword puzzles, and watching game shows. She enjoyed her friendships at church, work, and in the neighborhood. She enjoyed finding the perfect greeting card and sending them to family and friends. She enjoyed being the matriarch of her family, being the number #1 Mrs. Brunson, and Nana. She enjoyed her children and their spouses, grands, and great-grands. Pauline leaves a great a legacy of love, faith and devotion.

Share Your Memory of
Pauline
Upload Your Memory View All Memories
Be the first to upload a memory!