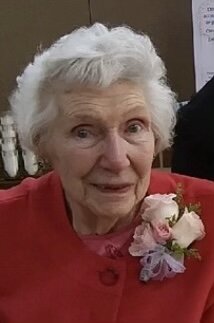 Virginia Florence Weiss, 96 died on December 1. Born and raised in a large German family in the heart of Bergen County, family was everything to her. She was the much loved and only daughter and niece to this family of five sisters.

After high school she went to work at Mack Truck in the Empire State Building in NYC.

During the years of World War II she volunteered at the Stage Door Canteen which held dances and provided refreshment for soldiers and sailors on leave.

She met and married Charles W. Weiss Sr. of Patterson. They were married in December 1948 and were married for 69 years.

A hard working welder, Chuck and Jean bought a home and settled in the small town of Elmwood Park (formerly East Patterson) N.J. to raise their two children. A homemaker, Jean reveled in her family, her children, her parents and her four Aunts. A gifted storyteller, she handed down and kept alive the family tales and history. In her later years, she returned  to the workforce, first at Bambergers  Department Store and later babysitting neighborhood children.

She and her husband traveled throughout the United States and abroad, with Ireland as her favorite place to visit.

A bright and shining optimist, she suffered a devastating tragedy when she lost her young married daughter in 1982.

She never lost her faith in God  or her innate ability to always look for the bright side. She deeply cherished her husband, son and daughter in law, but most especially her grandsons.

She was a long-standing and active member of the Elmwood Park Senior Activity Center, chairing and organizing the senior trips to Atlantic City with her husband, Chuck.

She was a congregant of Warren Point Presbyterian Church in Fair Lawn, NJ.

Her faith sustained her when she lost her son in 2011.

Virginia was predeceased by her brother Robert, her daughter Pamela, her son Charles and her husband Charles.

She is survived by her daughter in law Kathleen Weiss, her grandsons Christopher Weiss and wife Jill, Gregory Weiss, Timothy Weiss and wife Lucí, and her much loved three great grandchildren, her sisters in law, nieces and extended family.

She always lived life with a sense of joy and hope and touched the hearts of all who knew her with her kindness and sweet smile.

Heaven has truly gained another angel.

A Memorial Service will be held on:

Interment will be at:

Share Your Memory of
Virginia
Upload Your Memory View All Memories
Be the first to upload a memory!
Share A Memory