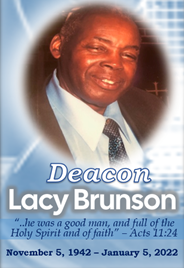 Deacon Lacy Brunson was born in Centenary, SC on November 5, 1942. He transitioned into eternal glory on January 5, 2022 at JFK Hospital, Edison, NJ; just 8 short months after his loving wife.

Lacy was born the sixth of seven children to James and Elizabeth Brunson. Lacy grew up in SC knowing the farm, family, church and music. He always talked about his father playing the steel guitar and his family all being musically inclined. He attended Smith Swamp Elementary School until the 8th grade. He stopped his schooling to work on the farm and help his family. From his youth, he was a hard worker and prioritized his family.

After the passing of Lacy’s mother, Lacy’s father married Ruth, whom Lacy affectionately called “Mom Ruth”. Lacy instantly assumed the role of big brother to his new younger siblings. Lacy then moved to Florida and lived there until his early 20s. Following his sister Carrie, he left Florida to migrate north to New Jersey. Lacy began building a life for himself in NJ, working and attending church. He joined the Church of the Living God in Fanwood where the pastor was Rev. Arthur Warren. There he met the love of his life. She played the big drum and he played guitar. The story goes his sister tried to fix him up with another young lady but he already had eyes for his future wife Pauline. Lacy became friends with Pauline first and they were married on March 7, 1964. They remained best friends their entire 57 years of marriage.

Lacy and Pauline started their lives together and had two sons; Lacy Ronald and Dwight who are 2 years apart in age. Their life included church and family.  During this time while working assembling bikes, Lacy was asked if he’d be interested in fixing cars. He seized the opportunity which launched him into his lifetime career. He was first a self-taught auto mechanic while he worked at Sunoco Gas Station, Mr. Robinson’s Auto Shop and other local shops. Then in the early 1970s, he decided to go to school for formal training. After finishing school, he was offered a job Colonial Tanks where he worked until 1987. His trade expanded and he became a diesel mechanic.

During the 1970s, major changes came for the Brunson Family. Lacy and Pauline purchased their first home, had another son Brock and they left their church in Fanwood. They began attending Zion Holy Church under Bishop Leonard Williams. At Zion, they continued to serve as they had in their old church. Lacy was a deacon in Fanwood. Now at Zion, he was humble and took all the necessary steps to become an ordained deacon in his new church organization Mt. Sinai Holy Church of America.

Lacy and Pauline had a home full of love. Their sons knew their father was stern but loving. He disciplined them but he spent time with them. He attended their games, provided them music instruction, took them fishing and showed them how to be men. Pauline could depend on her “sweetheart” to be her partner and friend. Their lives included extended family gatherings, church, football and good eating. Lacy was known for being giving and helpful by his extended family and friends. In the summers, Lacy and Pauline and family attended the Gordon Family Reunions. Lacy enjoyed these so much that he planned a Brunson Family Reunion in 2001. It wasn’t anything he wouldn’t do for those he loved.

All their married life, Lacy had worked nights except for one year. When he retired in 2007 from Yellow Freight, Lacy was able to become even more active in his church. During these years, he and Pauline attended Noon Day Prayer. He worked with young people at the church and paid for their music lessons. He was awarded Man of the Year by the Men’s Dept. and a Music Appreciation Award. In his other time, he went on even more fishing trips, watched more westerns and game shows and fixed cars for family and friends. In these years, his family grew too. He enjoyed being “Granddad” to his grands and great grands and “Pop” to his daughter-in-laws. And he became a father once again when he found out he had a son Ray from when he had lived in Florida. Lacy loved his family and leaves a great legacy of love, faith and devotion.

He was the epitome of a man who provided, loved and modeled. In his last few months, his nephew “Clebo” and his brother “Boy” came to pick him up and took him on what would be his last road trip. They traveled from NJ to SC to FL with a different activity planned each day including “Lacy Brunson Day” and family visits along the way. When Lacy returned, he began talking about going “home”.  Well, Lacy is in his heavenly home now. Like Acts 11:24 says, “… he was a good man and full of the holy spirit and of faith.”

Share Your Memory of
Lacy
Upload Your Memory View All Memories
Be the first to upload a memory!
Share A Memory