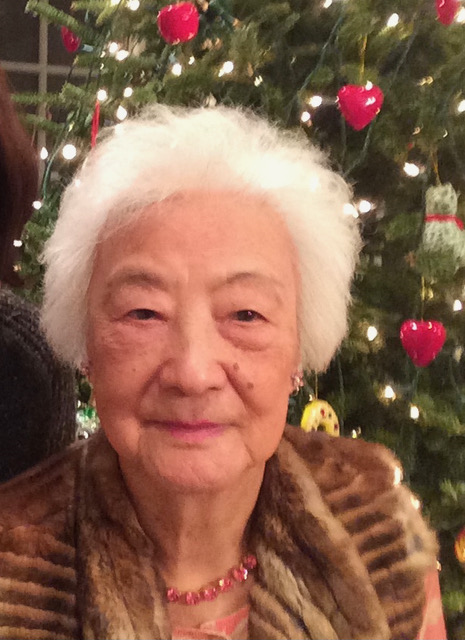 Please share a memory of Kuyun to include in a keepsake book for family and friends.
View Tribute Book

Kuyun Ma, the beloved mother to Annie Lo and son-in-law Daniel Lo, and doting grandma to Eric, passed away March 7, 2022, at home surrounded by family. She was 98.

Born at a time not too long after China made the transition from the Qing Dynasty to a republic country, and to an old-fashioned family as the youngest daughter of five, Kuyun was a woman of a “new” era, for her generation. She was one of the very few women who finished a university education in the early 1940s in China. In her younger days, she took pride in her ability to cite Shakespearean sonnets.

Her marriage to General Mou, among the 1st class of graduates from Whampoa Military Academy, and a hero in the Sino-Japanese war, ended abruptly in 1954 when he passed away unexpectedly in Hong Kong.  She then relocated from Hong Kong to Taiwan and raised her daughter as a single parent.  Since her English degree could not land her a job adequate to provide a stable and comfortable life for her daughter, Kuyun gained new skills to work in the banking system. Her persistent effort paid off as she rose from a temporary employee to a manager at her retirement.  She passed the lesson on to her daughter Annie at an early age that "no matter who you marry, you need to have the ability to be independent.”

Her strong will and self-discipline were among the secrets to her longevity. She took long walks both morning and afternoon, summer or winter, every day until the very end. She did have a sweet tooth though and particularly favored baked goods Eric brought home from New York City.

Kuyun lived and treasured every day of her life. She maintained her appearance meticulously, paying particular attention to her hair and makeup. Her choice of attire was colorful but always elegant. People marveled at her beautiful visage even into her late 90s.

Her family will remember her as a loving and thoughtful mother and grandmother and are blessed by the many years they had together.

Share Your Memory of
Kuyun
Upload Your Memory View All Memories
Be the first to upload a memory!
Share A Memory