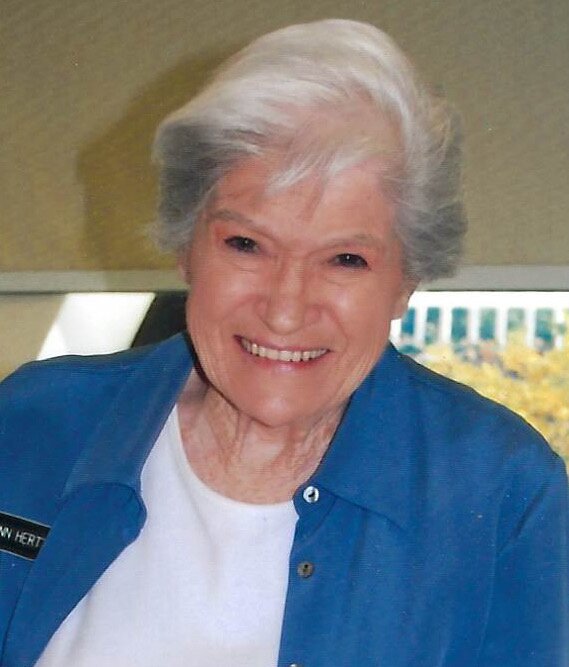 Ann peacefully passed on Palm Sunday after spending her final days with her children by her side.

Ann was born in Pittston, Pennsylvania, where she lived until moving to New York City with her family at the age of thirteen.  In December of 1949 when she was twenty-two, she went on a “Blind Date” and met Oliver Herttua. They fell in love and were married 6 months later June 1950.   Ann and Ollie were married for 53 years until his passing in 2003.

Before starting a family Ann worked as a Switchboard Operator, back in the day when all calls were manually connected cord by cord and she tried to resist the temptation of the other operators who loved to call out to listen to someone’s call; often of a famous person, celebrities and politicians of the time.

After her first two children were born in NY city and having plans for a much larger family they decided to move and purchased their first home in Union, NJ.  They lived there until 1963 and all Jon can remember is his older siblings going off to school and Ann watching Jack LaLanne on TV and doing her workout in front of a black and white TV screen.

The family grew to six children quickly (three girls and three boys) and when the three bedrooms were too small they bought a lot in the Watchung Mountains with a winter view of the NY skyline when the leaves were off the trees.  Ann and Ollie designed and built their dream house on a corner lot on a new street with plenty of room for everyone including the last baby (Christine) 5 years younger than her older brother.

As soon as all the children were all in school, Ann who had the energy of a marathon runner would share her passion to volunteer and giving her time to others in need, sharing the gift of love, compassion, the importance of reading, and helping others.  As a Candy Striper helping and supporting the sick at Muhlenberg Hospital, Plainfield, NJ.  Then to help others learn the importance of reading she was a volunteer librarian every place she lived her entire life including Watchung, New Jersey, Hobe Sound, Florida, and until recently Basking Ridge, New Jersey.

She always had time for her girls and the Girls Scouts too serving as Troop Leader and Head of The Washington Rock Girl Scout Council.

Ahead of her time recognizing the importance of conservation and the environment she began recycling in 1965 and would drive each week over ten miles to recycle, glass, paper, and cardboard.

Ann almost drowns on the Susquehanna River in Pennsylvania when she was a young girl, her older brothers who knew how to swim took her out and threw her in over her head before she ever had a swimming lesson, she sunk like a rock and didn’t come up, luckily her older brothers recognized she was drowning and pulled her up.  After that near-death experience, she never did learn to swim but made sure each of her children could swim and they all loved it.

Ann’s challenge of not swimming didn’t slow her down to the challenge that the family loved boating which would mean Ann had a lot to do for the weekend adventures.  Taking six children in a small 18’ “Thunderbird” tri-hull boat, launching it out of Atlantic Highlands, NJ motoring around Sand Hook Point in NJ, and then “beaching” the boat on a sand bar offshore so everyone could all swim to shore and have a picnic lunch on a quiet beach.  She made the crossing each time and never revealed her fear of the water until all the children were accomplished swimmers.

In the 1960’s Ann decided vacations at the Jersey Shore were too much work to keep the sand off the kids and dog so it was time to discover lakes.  The family took annual summer vacations for two weeks throughout the Northeast, at many different lakes; Moosehead Lake, ME, Lake Winnipesaukee, NH, Candlewood Lake, Ct, Lake Wallenpaupack, PA, Lake Hopatcong, NJ.

After years of exploring the family, including the six children, two cats, and a dog, they started camping on the islands of Lake George, NY.  Ann would pack for the family station wagon, with the family boat on a trailer, fill it with CAMPING GEAR and food for two weeks and then live on an island with no running water, no electricity, no phones, and cook three meals a day for and care for everyone. Wow, how could you call that a vacation for Ann? She did it with love for her husband and children and never complained.

However, that all changed in 1971 when Ann and Ollie saw an ad in the NY Times for a house for sale on Lake George, Ann drove by herself the 250 Miles to see the house, she called home and said we have to buy it and they did.  That was the beginning of 50 years of joy and tears.

The Lake House was named “Herttua’s Hideaway” and Ann and Ollie spent every summer there inviting friends and family from all over the world to come share and enjoy what is commonly called the “Queen of American Lakes” for its timeless beauty and natural splendor.  Lake George is one of the cleanest lakes in America and Ann drank the water directly out of the lake as do millions of others.

Ann enjoyed hiking the trails and mountains around Lake George and continued to hike into her 80s.  Ending days at the lake enjoying cocktails on the porch watching beautiful sunsets looking over the lake, playing tennis and golf were always planned activities at Lake George as well as family card games after dinner.

After the passing of Ollie in 2003, Ann moved back to New Jersey and found many new friends at Fellowship Village in Basking Ridge.  This enabled her to be closer to family, friends, and a shorter drive for summers at Lake George.  She continued to play competitive Bridge as one of the fun competitive activities to challenge herself.

Ann was born in Pittstown, Pennsylvania, daughter of Helen and Roy Dennison. She is predeceased by her three brothers, Roy, Tom, and Don.

Share Your Memory of
Ann
Upload Your Memory View All Memories
Be the first to upload a memory!
Share A Memory