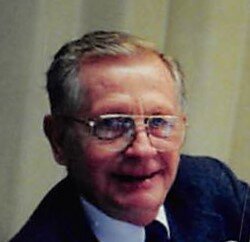 John David Moeller, age 92, passed away on Sunday, July 17, 2022, at RWJ University Hospital Somerset.  Dave was born in Brooklyn, NY in 1930, was raised in Hampton, NJ, had resided in Basking Ridge, NJ, and Somerville, NJ, and had been a resident of Martinsville, NJ since 1958.

Dave was a loving father, devoted husband, and a small business owner whose clients were family.

Dave started his employment as a driver and salesman of a wholesale pet supply company called Stirling Center Corporation in Stirling, NJ.  After working for the company for 20 years Dave went on to purchase the business.  He loved his work as a salesman and owner of a wholesale pet supply company.  “Red,” as the shop owners called Dave, was known for his jokes and storytelling throughout pet shops across New Jersey and Pennsylvania.

Summer vacations were spent traveling in the family station wagon with camping gear, his wife Janet, and five children visiting parks, forests, and bluegrass festivals from Maine to Florida.

Dave was always sympathetic to those in need, he was a lifelong supporter of stray dogs, cats, and the New York Mets.

In lieu of flowers, memorial donations may be made in Dave’s loving memory to the American Legion Post 327 Auxiliary, Attn: Angela Papcun, 77 Old York Road, Bridgewater, NJ 08807. All donations will be used to aid local disabled and homeless veterans.

Share Your Memory of
David
Upload Your Memory View All Memories
Be the first to upload a memory!
Share A Memory