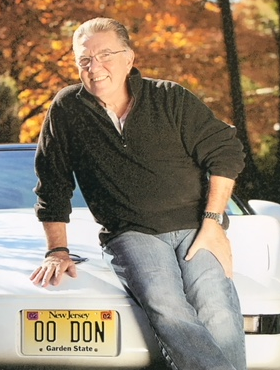 On May 12, 2020, heaven heard Donald Francis Pannacciulli’s signature “Pirate Joke” for the first of what will be for sure many times. His first day with “the hook”, as the punchline would go, was instead the first time in 27 months he was free of his pancreatic cancer and the pain it brought. Born and raised in Jersey City until school age and then move to the suburbs of Little Ferry, NJ. Always one to share a story, a song, a nickname or a laugh, there was hardly ever a person that did not end up knowing Don if they ever spent time in the same room together, no matter how brief it was.

A classic car enthusiast, he usually could be seen in his Corvette about town in Watchung, NJ, where he lived. Donald had a life long love of music, which included his band, the (“Fabulous”) Kelmonts, opening up for the Supremes in Palisades Park in the 60’s. He was a graduate of Montclair State University and was a computer sales manager and executive for over 40 years, before retiring in 2016. During the Vietnam war, he proudly served his country both overseas and at home in the US Air Force, as Sergeant. Don’s state side service included work on several of the Apollo space missions, including 11’s crewed lunar landing. He was a member of the American Legion Post# 0293 in Warren, a member of the Berkeley Heights VFW Post #6259, and a parishioner of the Church of the Little Flower in Berkeley Heights.

A memorial service will be held on Saturday, September 25th, 2021 at the Church of the Little Flower, 310 Plainfield Avenue, Berkeley Heights, NJ.

Due to the current environment, flowers are not able to be donated at this time. In lieu of flowers please donate to Don granddaughter's Relay for Life campaign in which she was raising money in his name.

Share Your Memory of
Donald
Upload Your Memory View All Memories
Be the first to upload a memory!
Share A Memory