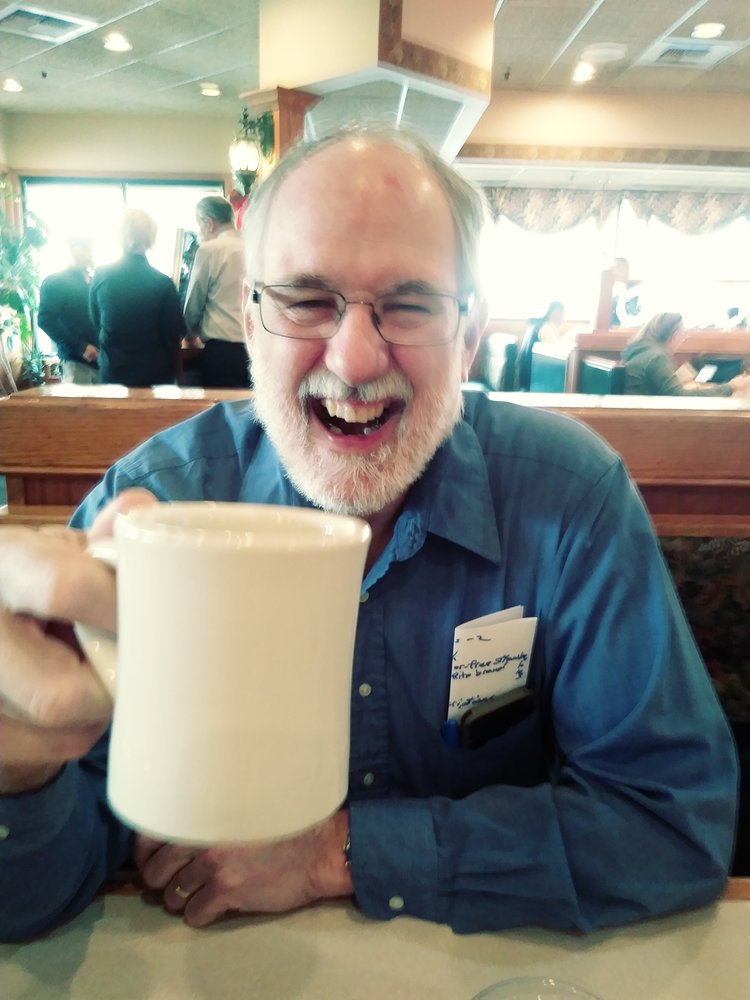 The Rev. Dr. Thomas T. Peters passed away peacefully on July 9, 2021 surrounded by loved ones. He suffered complications from a bone marrow transplant he received in February. He was 65 years old.

Rev. Peters, known simply as Tom, will be lovingly remembered by his wife of 42 years, Rev. Barbara Grace Peters; their son, Trevor Thomas (Nancy), and their daughter, Alison Grace; his brother John (Lee) Peters, of Ballwin, Missouri; his brother-in-law David (Laura) Lundell; as well as his nieces Abby (Robert) Saul and family, Carolyn (Matt) Chivetta and family, and Amy Lundell.  He was preceded in death by his parents, Sue and Richard E. Peters.

Tom was born on September 4, 1955 in Richmond, Indiana. He graduated from Maryville College in Maryville, Tennessee in 1978, with a Bachelor of Music degree in Music Education and – just as importantly – the love of his life, Barbara. Together, they then earned Master of Divinity degrees in 1981 from Louisville Presbyterian Theological Seminary, in Louisville, Kentucky.  Tom later earned a Doctor of Ministry degree in 2006 from Drew Theological Seminary in Madison, New Jersey.

Tom and Barbara were first called to be Co-Pastors of Corfu United Presbyterian Church in Corfu, New York, where they served for 9 years. The connection to their first congregation was meaningful, lasting, and full of wonderful memories. They always felt like they “grew up” there as Ministers, and could never have had a better first church experience as a young clergy couple right out of seminary.

They moved to Stirling, New Jersey, in 1990, when Tom received a call to become the Pastor of the First Presbyterian Church of Stirling. He served his congregation faithfully for 30 years, until his retirement on January 31, 2021. Tom was also very active in the Presbytery of Newton and enthusiastically enjoyed his term as Moderator of the Presbytery. Additionally, he valued his participation in the Watchung Hills Clergy Association.  During his time in Stirling, his wife Barbara found her calling at Wilson Memorial Church in Watchung. She retired from Wilson Memorial, also in January 2021, and became Pastor Emerita of that congregation. It was always their dream to begin their lives as clergy together and to retire together.

Tom breathed joy and life into the First Presbyterian Church of Stirling.  He and Barbara moved into the manse on the church grounds with their two young children, who grew up surrounded by the love of an entire congregation.  He felt passionately about social justice issues, and often his concerns about those marginalized by society found their way into his preaching. Humor was important to him as well and it warmed his heart when people laughed at a joke he made during a sermon or a story he told.

Tom enjoyed woodworking, reading, exploring his love of music, playing with the family dogs –  Pachie, Kenzie, Jacques and Chloe (and granddog, Jess)  – and visiting the Peters Orchards in Pennsylvania, run by extended family members.  He loved traveling, and would happily talk about his favorite beer from Germany (Kölsch), or his experiences in Nairobi, Kenya, where he visited his congregation’s sister church. A trip to Scotland in 2019 not only fulfilled a lifelong dream to see where the Presbyterian Church began, but became a presentation to his congregation.

If he loved something, he would not hesitate to sing its praises. Literally, in the case of his lifelong dedication to raising his voice in song. He was a proud member of The Masterwork Chorus in Morristown, New Jersey, with whom he performed Handel’s Messiah at Carnegie Hall. He was also a member of the Motet Choir at the Chautauqua Institution in Chautauqua, New York, where he and Barbara spent many happy summer vacations with dear friends. Tom had a love for his family and friends that was unmatched. In fact, everyone he met was a potential friend, and he welcomed all into his church and his home with good conversation and an open heart.

Yet when he looked at Barbara, and their children, it was clear that they owned his heart. Barbara was Tom’s great love, by him every step of the way of his adult life, and the reason his smile always looked that much brighter when she was near.  He was immensely proud of Alison, who followed in her parents’ footsteps by entering the ministry, and of Trevor, for finding a different way of helping people, as a patient care technician at a local hospital.

Now their hearts hold his memory, where they will never stop feeling his love.

Tom’s family would like to thank all at the Cancer Institute of New Jersey/Robert Wood Johnson University Hospital, New Brunswick, for the wonderful care he received and, especially, his primary oncologist, Dr. Vimal Patel.

A Memorial Service for Tom is scheduled for 1 p.m. on July 31, 2021 at Wilson Memorial Union Church, 7 Valley Road, Watchung, New Jersey, 07069. The family respectfully asks that masks be worn. In lieu of flowers, donations in Tom’s memory may be sent to The First Presbyterian Church of Stirling (158 Central Ave., Stirling, NJ, 07980) or Corfu United Presbyterian Church (63 Allegheny Road, Corfu, NY, 14036).

Share Your Memory of
The Rev. Dr. Thomas
Upload Your Memory View All Memories
Be the first to upload a memory!