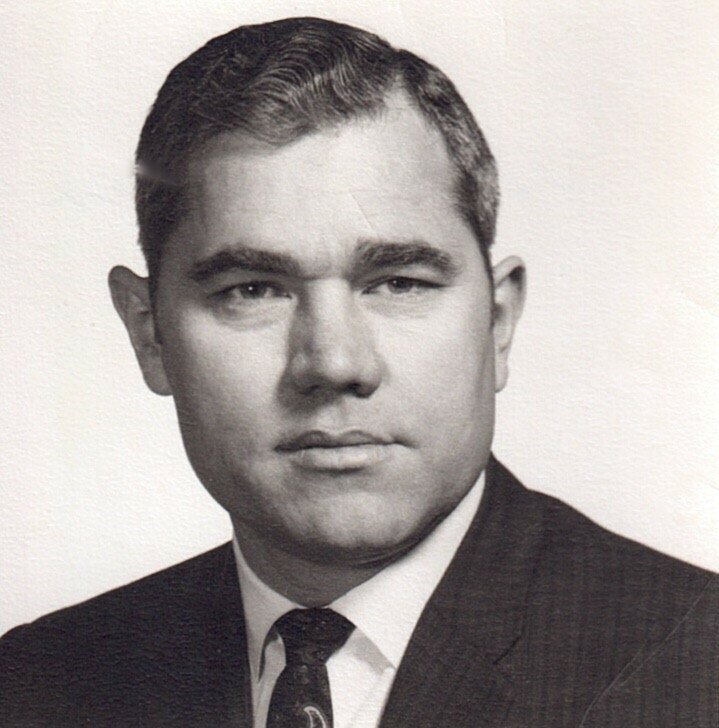 A private ceremony will be held soon at the Brigadier General William C. Doyle Veterans Memorial Cemetery, in Arneytown, NJ.

Memorial donations may be made to Operation Jersey Cares Inc., for families and veterans of the armed forces, or CAPIC Cats, a nonprofit that rescues, neuters, and helps get cats adopted. Links for these charities are also at the bottom of this page.

Ted was born to Dale and Della McCracken on August 22. 1932 in Chicago, Illinois.  Ted was the youngest of three children and had fond memories of spending summers on the family’s dairy farm in Weyerhaeuser, Wisconsin with his two sisters Margaret (Mae) and Cathleen. During his time on the family dairy farm, he had several pet cows and a pet pig. He worked on the farm from the time he was a young man, driving wagons of hay and milking cows.

His mother Della supported her children by working at the Campbell Soup company as a supervisor in the travel department. Campbell products from the company store helped them make ends meet after his father left the family. Ted was an active youth who loved sports, his favorite teams were the Chicago White Sox and Chicago Bears.

Ted’s family was active in the local Lutheran Church where his mother played the piano and Ted sang in the choir.

In 1951, Ted enrolled in St. Olaf College in St. Paul, Minnesota as a History major. He left college in 1953 to join the Air Force. His life dream was to fly and he had a scrapbook of planes from his childhood. When asked what his favorite color was he always said, “sky blue”.

On February 9, 1963, Theodore married Lorna Jane Doonan in Chicago, Illinois in his local Lutheran Church.  They met while he was stationed in Erding, Bavaria, Germany with the Air Force. Lorna was in Munich working with the Department of Defense. They were both going to the Swiss Ski School in Grindelwald, Switzerland on the train when they met. His times in Germany were some of the best times of his life as he loved German culture, skiing in the Alps, driving German cars, drinking German beer, and of course the people he met there.

Ted and Lorna’s first Air Force home was in Salina, Kansas near Schilling Air Force Base. Six months later they moved to Merced, California so he could continue pilot training on the KC135 (later the 707 commercial jet).

Their next stop was Loring Air Force Base in Limestone, Maine where their daughter Lesley Gail McCracken was born.

Ted was honorably discharged from the Air Force in 1966 when he was hired as a pilot for Pan American Airlines. He was stationed at John F. Kennedy airport and the family settled in Tinton Falls, NJ.

In August 1967, they welcomed their second daughter, Laura Lee McCracken.  She was born at Riverview Hospital in Red Bank, NJ overlooking the Navesink River.

In 1977, Ted and Lorna were divorced and he moved to Atlantic Highlands, NJ.

In 1979, Ted and his second wife, Barbara Howell Salem were married.  Her daughter, Rebecca Salem joined Lesley and Laura as their sister through the marriage. Barbara and Ted lived in Manchester, NJ, and then Fair Haven, NJ where they enjoyed sailing on the Navesink River and going out to Red Bank. They were married until December 2000, when they divorced.

Ted worked for Pan American for more than 25 years when the airline went out of business.  He then continued his career flying for United Airlines until his retirement in 1997.

Ted had numerous hobbies including reading history and mystery books, chess, crossword puzzles, model aircraft, sailing, golf, skiing, and listening to classical music. He also loved to do jigsaw puzzles, play board games with his family, discuss politics, and tell stories about his travels.  He was very fond of animals and rescued several cats and dogs. He was also very skilled with woodwork and constructed several home additions.

The McCracken families are Sons and Daughters of the American Revolution. The first McCrackens in our family came to the US from Northern Ireland in the 1750s and fought in the Revolution. His mother’s family was from Germany and Norway and he embraced his German roots.

http://paypal.me/capiccats for the PayPal site to donate.

Share Your Memory of
Theodore
Upload Your Memory View All Memories
Be the first to upload a memory!
Share A Memory